Yoga Philosophy - What is Soul?

Article discussing the work we covered in the third Yoga Practice Philosophy Group session in August 2018
; 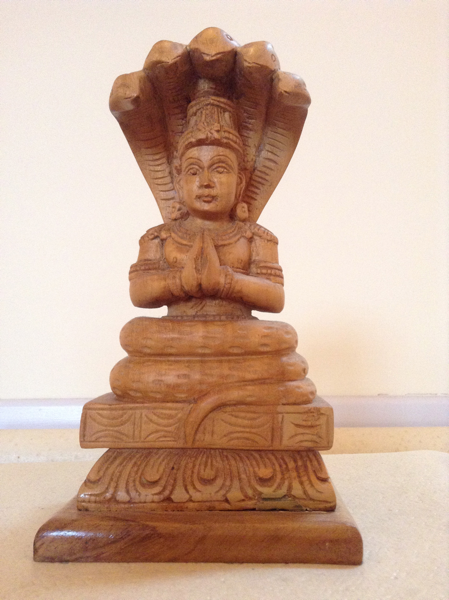 Yoga Philosophy Group - What is Soul?

In this article I summarise what we covered in our third group meeting in August 2018 ‘Yoga Philosophy – What is Soul?’
The first blog on ‘What is Mind?’ can be found here yogapractice.co.uk/yoga-philosophy-what-is-mind/
the second blog on ‘What is Heart?’ can be found here yogapractice.co.uk/yoga-philosophy-what-is-heart/
In the third yoga philosophy group session we explored the concept of ‘what is soul?’ from a western and yoga view point. Once again we re-capped the previous sessions, what is mind and what is heart.

In this session we started off individually writing synonyms for the term soul, as the word can have very different connotations depending on your background and beliefs.

I asked people to write 5 different words they word think of that are of a similar meaning to soul.  I also asked everyone to write down a definition of soul as they perceive it, prior to our discussions.

You can see the terms that were shared on this flip-chart. 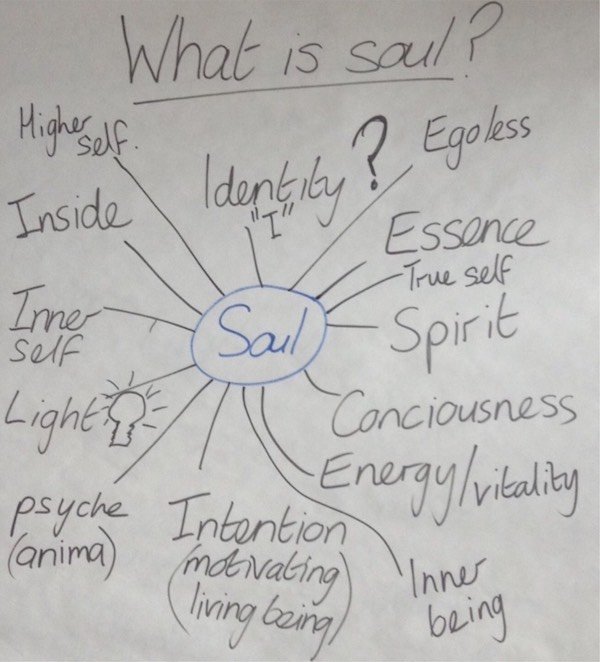 Soul is a person’s essence, they are born with it, it affects their personality and values. Our soul is who we really are.

We discussed that soul is often identified as the spiritual or (depending on your beliefs) a religious aspect of ourselves.  I read out a few soul definitions other people had given…

Gary Zukav: The soul is that part of you that existed before you were born and that will exist after you die. It’s the highest, most noble part of yourself that you can reach for.

Deepak Chopra: The soul is the core of your being. It is eternal. It doesn’t exist in space/time. It’s a field of infinite possibilities, infinite creativity. It’s your internal reference point with which you should always be in touch.

Daniel Pink: The soul is, I think, our capacity to see that our lives are about something more than simply the day to day, and that we’re here for a purpose. It could be connected to religion or not, but that there is a purpose of your being here.

We also shared the definitions that a few people had written down, a few of which I’ve added here, (please send me your definition if you want others to see what you wrote down).

“It is the essence of a person that shines through, that inhabits the physical outer shell of a person, the part of you that responds spiritually to life.”  I thought a bit more about that last bit and I think they, body and soul, are both separate and joined.

“To me Soul is pure and indestructible…its the true refuge of both the mind and body.”

I don’t remember the exact wording but one definition was exploring whether soul exists or if it is a construct of society. 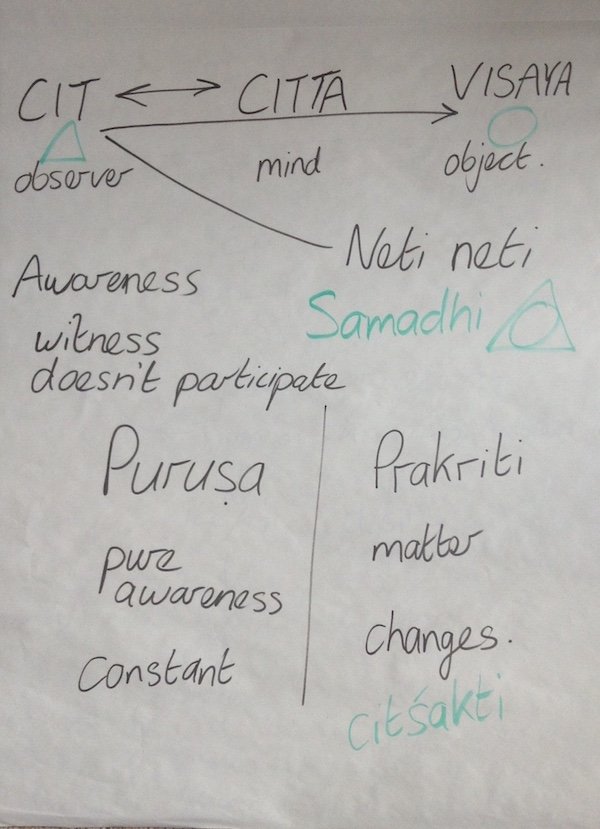 We then looked at soul from the view point of yoga teachings.

I mentioned that there are several different terms that are used in the Yoga Sutra which can be translated to soul, including :-

I then explained a model of how yoga defines soul.

When we are observing an object there is the part of us that sees an object, we can label, judge and add our own interpretation to that object.  The part of us that does this is our citta (psyche). However, there is also part of us that witnesses the psyche and the object, it doesn’t participate but is present and observes the connection.  Most of the time, when functioning day-to-day we are unaware of this third aspect.

This model illustrates the connection between cit – citta – visaya

I asked the group if anyone had an experience of this part of us that witnesses without engaging in any way.

One person shared an experience they had during illness, where their life was at risk. They described feeling like they we able to observe the world without engaging in it, as though they were separate to all going on around them and a witness to that moment in time.

I related a couple of moments where I have felt also “as if I was absent”, witnessing a scene, being present but not actively involved. They both involved moments of observing wildlife, one was seeing an adder kill and eat a mouse, the other was swimming past a turtle. Both times for a fleeting moment I felt completely absorbed in the moment, but it soon disappeared as my mind got involved with dialogue of how amazing an experience it was etc… etc….

Various schools of eastern philosophy describe part of us as being a witness. This concept is discussed in the Samkhya Karina (7th century BC). This text is described as one of the six perspectives of Indian thought. It underpins Yoga, Buddhism and Ayurveda.
In this text it describes the observe as Purusa (spirit / pure awareness) and everything else as Prakriti (matter)

Through practicing yoga, we are aiming to link cit and citta or to use the other terms purusa and prakriti.

I explained that from an eastern view point cit or pursusa are unchanging, they are constant, they are the same at birth and after death as there is no change.  It is an unchanging observer / witness to our lives.

I spent quite a bit of time talking about this, as it is difficult to grasp the concept, that an aspect of us is unchanging.

This is a fundamental concept in Eastern Philosophy.  To help explain this concept I’ve written commentary on the Yoga Sutra that relate to this idea, they are taken from Paul Harvey’s website.

In order to recognise change, there has to be something that is unchanging.
We need constant means of reflection.  Only that which does not change can see change.

Something is ageless within us.

Cit is described in the Upaniṣad as Ne’iti Ne’iti or not this, not that.

Cit is all that is left it doesn’t change. So spiritual growth is a misnomer, the spirit (cit) can’t grow, however our awareness of it can change, we can become more spiritually aware.

This concept is explained in Yoga Sūtra Chapter Four verse 18
sadā jñātāḥ citta-vṛttayaḥ tat-prabhoḥ puruṣasya-apariṇāmitvāt
Due to the unchanging nature of puruṣa, the mental activities (citta) are always known by Pure Consciousness (cit), their Lord and Master.

Commentary on YS Ch. 4 v 16
“In each one of us there is something that experiences.”
– TKV Desikachar introducing the Taittirīya Upaniṣad 2001

“The witness cannot be witnessed.”

“Cit is always the same. Nirodha always refers to Citta. Thus Cit is a witness. What changes is only Citta.” – TKV Desikachar on Yoga Sūtra Chapter One verse 2

The term draṣṭṛ also refers to the part of us that witnesses, the translation is the seer.-

I felt it would be good to mull over these ideas – which was the perfect time for a tea break.

One question that arose over tea was around whether cit was an individual soul or a collective soul.  In terms of yoga teaching cit is seen as an individual aspect, although the sutra do discuss the idea of a higher-being / high-self / the supreme soulbut they have a different term for this – īśvara

When the mind is devoid of other thoughts then it is able to reflect cit back to cit.  if the mind starts to label or comprehend this then it is no longer reflecting cit.

This state of complete absorption is referred to as samādhi(complete integration / direct perception). It is a non-functioning state, it is as if the mind is absent. This is different to the complete integration experienced when the object is something other than cit.  We can be completely absorbed in a moment and left with an experience of that moment, whether that be an external experience such as my turtle sighting or a more profound reflection of our essence.

Yogi (a person who is proficient in yoga)practice with a long-term goal of experience the citta reflecting cit.  This goal of yoga is called citsakti, to be established in the power (sakti) of cit.

The quality of the observation / perception depends on the clarity of the mind. If the mirror is clouded it is unable to reflect clearly.  Through regular yoga practice, we are removing some of the dirt off the mirror, to aid our ability for the mind to see clearly and to be able to reflect our essence.

These ideas are summarised in the following yoga sutra…

When that [cit] is totally immersed in Its form of unchanging Spiritual Consciousness, there is perfect comprehension of one’s own luminous nature. (Frans Moors). The mind is not the one who knows, but it plays an essential role in the process of knowing. When there are no external stimuli and interests to extrapolate, there are no impressions in the mind relating to them. Then the mind is in total contact with and identical to the Perceiver. Then cognition of the Perceiver is possible. This cognition is not by the mind.

Yoga Sūtra Chapter Four verse 23
draṣṭṛ-dṛṣya-uparaktaṃ cittaṃ sarva-artham
The all purpose psyche is coloured by the seer and the seen.

This puts the mind in the unique position of enabling cit to understand all aspects of the changing world (prakriti) on one hand, and to know itself on the other.

The mind can only do one thing at a time it can either reflect the world to cit or reflect cit to cit.  Citta comes to know cit through satva nidra (sleep with clarity – memory of the experience and impression of it). Citta can’t witness cit but citta is left with an experience of cit.

Therefore, one of the main goals of yoga is to settle or contain the thoughts of the psyche (Y.S. Chp. I v 2) in order for the seer to take up its own character.

Yoga Sūtra Chapter One verse 3
tadā draṣṭuḥ svarūpe-avasthānam.
Then the seer’s own character takes up its place.

“During such a moment, without distractions, the power of the source of perception,
full of clarity and completeness, shines forth.” – T Krishnamacharya

“In the Yoga state we experience what is beyond the mind.” TKV Desikachar

“Yoga is the pursuit of the unpursuable.” – TKV Desikachar

Yoga practice (not just asana practice (posture)) aims to move us towards cit, everyday life drags us back to citta.  We move on a scale between being closer to cit or citta, our lifestyle and habits will affect where we are on the scale moment to moment.

I briefly mentioned at towards the end of the session, the idea that cit is the instigator of action, the impulse for action comes from knowledge.  These impulses are to serve the seer not the mind.  Yoga sutra Chp. VI verse 18 discusses this (see definition and commentary above). 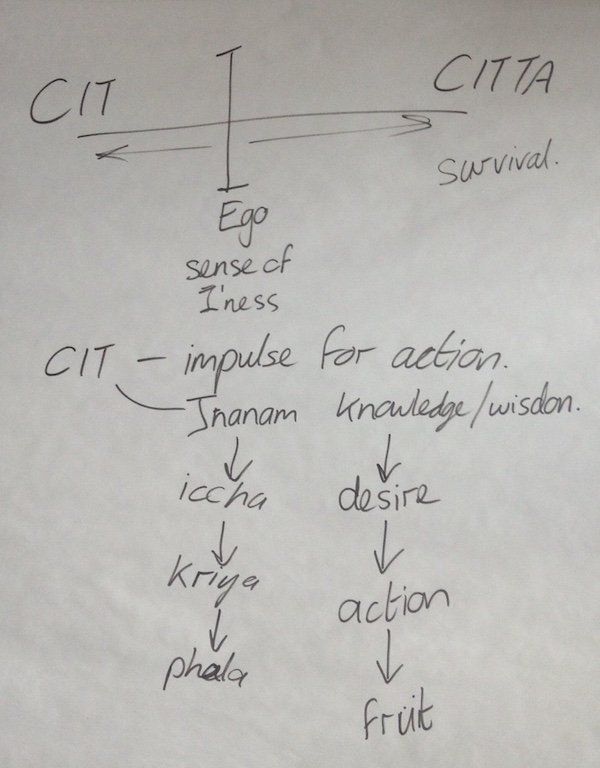 To act as a brief reminder of this series exploring what is mind, heart and soul from a yoga view point I’ve chose just 3 words…