Why I choose not to use certain terms and rituals when I teach yoga.
;

There are many times when Hindu terms and rituals in yoga are taught in classes without their origin or meaning being explained.  In this brief article I’m going to discuss one of the common used words and a prayer ritual that I choose not to teach in my lessons.

Students come to yoga from a huge variety of backgrounds and many have their own religious and spiritual beliefs.  Yoga is practiced by Hindus and often some religious rituals are still taught in yoga classes to people who aren’t Hindu.  I don’t want to teach rituals or use words that have their origin in Hindu practices out of respect for my students and the Hindu religion.

One word that is commonly used in yoga classes is Namaste.  This is a greeting used by Hindu’s.  Namaste is not a superficial gesture or a mere word, it is a way of showing respect and that you are equal to another person. 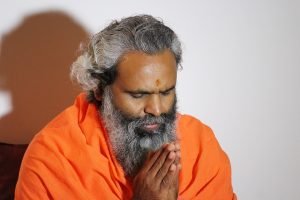 Namaste is now commonly used in a different context to its origin.  A simplified definition is of Namaste is “The divine in me bows to the divine in you.”

The reason Hindu’s use Namaste has a deep spiritual significance. It recognizes the belief that the life force, the divinity, the Self, or the God in me is the same in all.  The word is also used with a gesture of acknowledging this oneness and equality with the meeting of the palms. Hindu’s are honouring the god in the person they greet.

This meaning may sit comfortably with some students but unless they are aware of the true meaning I don’t suggest people say Namaste a group yoga class.  Students who know the origin of the word can choose to use it in their own practice if they feel it is appropriate for their beliefs.

For thousands of years Hindus have revered the sun, which they call Surya, as both the physical and spiritual heart of the world and the creator of all life itself. One of the means of honouring the sun is through the dynamic asana sequence Surya Namaskar (better known as Sun Salutation).

The Sanskrit word Namaskar stems from namas, which means “to bow to” as in namaste. Each Sun Salutation begins and ends with the namaste gesture (hands in prayer position touched to the heart). Surya Namaskar, or sun salutation, is included in a regular morning ritual of prayer and worship. It is the prayer of Lord Surya, the god of health.

Again this may sit comfortably with some people however in order to respect all backgrounds I choose not to teach the sun salutation sequence in my classes.

This doesn’t mean I don’t teach using Sanskrit terms or refer to yoga teachings from Patanjali’s Yoga Sutra. I am very careful about passing on yoga teachings that are not associated with a specific God or Deity.  I aim to make the yoga lessons I teach accessible to people from any religious or spiritual background.

With this in mind I would like to say “Thank you” to all my students for the work we’ve done together. I am constantly learning and seeing things from other people’s perspectives when I’m teaching yoga which enriches my teaching and practice.